Long Time Ago in Canada, Good Times in Washington, No Trouble at the Border 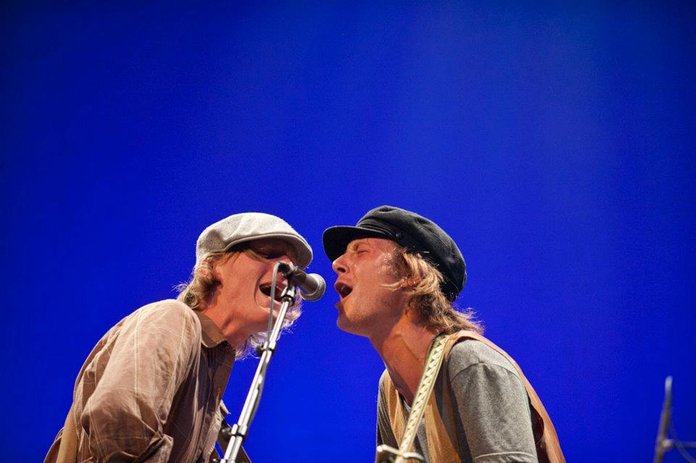 Finally, after all our hard work and preparation, we were able to launch “Long Time Ago” in Canada. It was released online where we ran at #1 on iTunes Canada singer-songwriter charts. Our release show at Victoria's MacPhearson Playhouse was filmed and streamed live to the world online. With help from the openers, Jon Middleton and Aidan Knight, the show was packed out. With fans, friends and family there, it felt just the way a hometown show should. Thanks to YouTube, people already knew a few of our new songs and were singing along. What a night! We ended it by heading down to Swans for a couple beers with the crew and then off to bed.... because the next night we did Vancouver! The show that night at The Biltmore was much more of a party vibe, as it was a club and not a theater. The Boom Booms from east Van came to open the show and did an amazing job. During our last song of the night we had a bunch of the guys from that band up for a big jam, was our last song like 20 min long?... maybe. Thanks to everyone who bought our new album and came out to the shows.

Fast forward to the following weekend, Seattle at the Tractor Tavern. This was Friday of the Halloween weekend, so some people dressed up. We opened for Flow Motion, an awesome band from Washington who totally surprised us and everyone in the crowd by covering the entire Beatles album “Rubber Soul” as a Phish style Halloween treat. Those guys are awesome and I think we will be doing more bills with them in the future. We also had some good solid supporters come out to that show and make it feel like a bit of a second home. Singing along and bugging us about “when is Long Time Ago coming out in the US?”. Soon guys, we hope before the spring! Then after hitting Pike Place Markets, and the occupy Seattle demo, we were off to Tacoma for Halloween Saturday where we dressed up like “cool hand luke” prison convicts, and played a great costume party at our favourite spot out there, Jazzbones. Tons of great support acts there as well, including Mighty High, an awesome instrumental reggae band. Good times, no trouble at the border and some new friends. Can't ask for much more.

On the topic of not asking for much, we were given the nomination of Top 3 in Vancouver's Peak Performance Project, which came with a $50,000 prize. Thank you to the 100.5 The Peak, and everyone who supported us, voted for us, high fived us. Thanks a lot. The winner, runner up and 3rd place will be decided at a sold out show at The Commodore Ballroom on Nov 17th. Top prize, $100,000 so we are crossing our fingers.

We acknowledge the financial support of FACTOR and Canada’s private radio broadcasters.
© 2022 Long Time Ago in Canada, Good Times in Washington, No Trouble at the Border