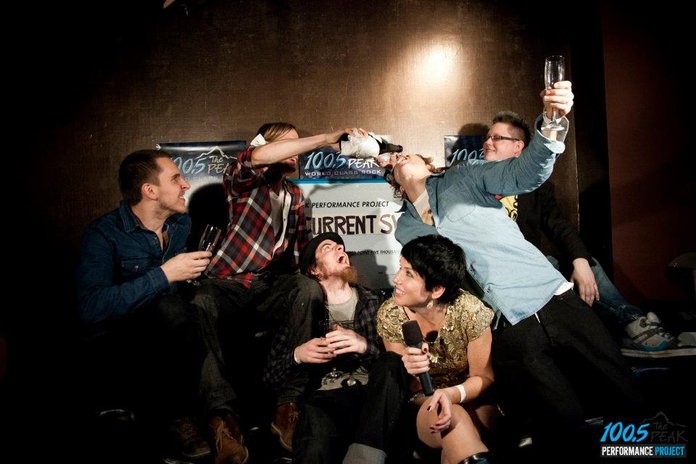 I can remember being stuck on a stretch of Highway called the Coquihalla which takes you through a high mountain pass, snow falling harder by the minute. We were on our last day of our tour of western Canada, and were slated to arrive in the late afternoon at Vancouver's Commodore Ballroom for the finale show of the Peak Performance Project. The only problem was that traffic was at a standstill up in the mountains, and the clock was ticking. With semi trucks and cars lining the ditches, we started to think that there might be a chance that we wouldn't make it to the show on time, or at all, and therefor not be able to see if we had won the competition, or claim our prize... and we wanted to be there to claim it, as top prize gets 100,500 bucks. Did we know anyone with a helicopter? No. So we waited it out and as the snow fell harder and harder, we inched our way through the pass and to Vancouver, and made it just in time to play a sold out show in front of 1000 people. With our good friends, families and loved ones present, Current Swell was awarded Top Prize, 100 grand to help develop our careers. Amazing. We are so thankful to have been involved in the whole project and feel very grateful to have won, especially with so many talented bands involved.

Western Canada is one of our favourite places to tour. We are so used to the loop, we know just where to find all the little perks in all the corners of this part of Canada. Like that pita place in Lloydminister, we know where the best bowling is in Winnipeg, we know who sells cold beer late night in Swift Current (Alberta's version of "cold green tea".) Yes I know, these are not really things to boast about but it has made life a lot more fun on the road to get to know the towns and country and really enjoy some of the drives. Take going through southern Alberta towards the mountains at sunset, big sky, big mountains, pretty amazing stuff. The shows were really fun too and people really rallied for us in support of "long time ago".

Right now we have just started our tour out in eastern Canada, starting in Ottawa and ending up in Moncton, and a lot of places in between. Schwartz's deli in Montreal and trying out our french was fun. Toronto at the Horseshoe Tavern should be a fun show, and we will shoot our first music video supporting our new album for the song "Too Cold" while there. Sarnia will be epic as usual, with fans that rival Edmonton. It was sad to not see Kingston as a tour stop, as the last time we played there was one of our most memorable shows ever; where the power went out on the entire town and we did a candle lit acoustic set with our friend Kim Churchill. So neat .…..Anyways,Back to it, thanks for reading, hello from everyone here in the tour van!

We acknowledge the financial support of FACTOR and Canada’s private radio broadcasters.
© 2022 Winning the Peak, Cold "green tea" in Western Canada and the Far East... (Canada)