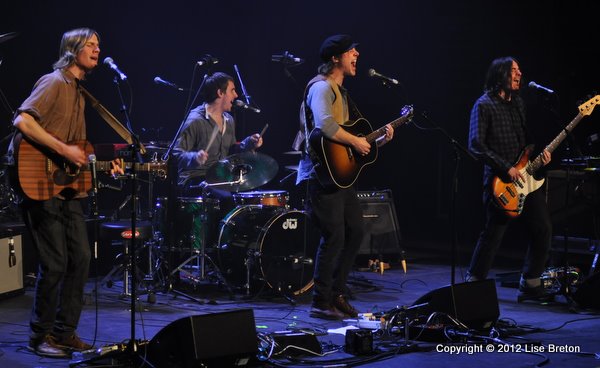 We are half way through our tour with Charlie Winston, right now, sitting in a Montreal hotel. After a great couple shows in Sherbrooke in a theatre from the 1920's, and a fun show in Seguenay we made it for a couple days off Quebec city. It was our first visit to the city, and we fell in love with the fortified older part of town, and some of the cafe's, pubs, and most of all the Palais Montcalm. We played 2 nights there supporting the CW band, and after the 2nd night we knew we had made a bunch of new fans and that we would be back for sure as soon as possible. We then made our way through a massive snow storm to Montreal where we are now, doing 2 nights at the Theatre Corona. I decided to try out a my french mid set last night, to let people know we were very happy to be there and I somehow managed to say a very perverted couple lines. Apparently there is a big difference between Juir and Juex or something. Anyways, the show went great and we are looking forward to our 2nd night at the Corona, before we head out to LA on our way to finish up the tour with CW in Edmonton and Vancouver. (unfortunately we can't be there to support Charlie's show in Calgary, but we would love to invite all our fans to check out his show at the Gateway! ) web link

We acknowledge the financial support of FACTOR and Canada’s private radio broadcasters.
© 2022 Winston Tour is Amazing!