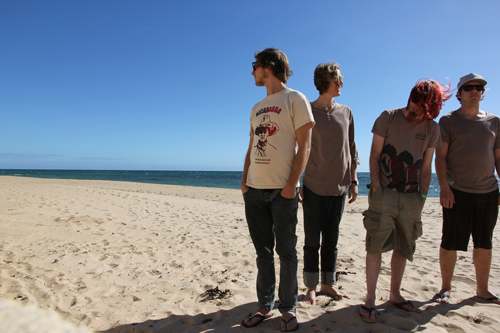 We're back from Australia and what a tour it was!

We started on the West Coast in Perth, opening for the Sticky Fingers and also played a show with them in Bunbury. We got to enjoy the coast and the sunshine and of course took in the local cuisine of pies. Delicious!

We then went to the East Coast to play the amazing Byron Bay Bluesfest. We were honoured to play not one, but two shows, with an encore at the end of our first set. With so many great acts playing, we did get some time to enjoy the scene, with excellent shows put on by the great Robert Plant, Paul Simon, The Lumineers and Fat Freddy's Drop to name a few. It was definitely an experience to be there and we enjoyed every minute of it and especially meeting fans and making new ones.

Soja was also playing at the Bluesfest and we continued to tour Australia with them, hitting up Brisbane, Coolangatta, Sydney and Melbourne. The crowds were fantastic and we loved exploring Australia and the uniqueness of each city, from the beaches at Surfers Paradise to the hustle and bustle of Sydney and the fantastic sidewalk restaurants in Melbourne.

Soja put on fantastic shows in each city and we were always in the crowd dancing along after our sets. Definitely check out their music if you're looking to get the party started.

We all got to enjoy some relaxing travel time after the tour, either in Australia or Bali. With so many places to explore in that area of the world we will have to come back!